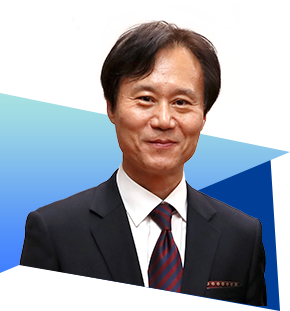 National Assembly Futures Institute was established to achieve the professionalism in future research, the independence from political parties and administration, and the convergence encompassing all fields. We will become 'a national partner opening a new future'.

Greetings!
The National Assembly Futures Institute is a government-supported research institute directly affiliated under the Chairman of the National Assembly, which plays a role of predicting the future of Korea and studying future strategies.

The purpose of future research is to change today into the desired future instead of resolving the curiosity of the future. Therefore, future research consists of future prediction, future selection, and future strategy. We will become 'a partner of citizens opening up a new future' by identifying the future and guiding the way toward it. We would like to ask your participation for the new NAFI to play its positive role for citizens.

National Assembly Futures Institute is the first government-supported institute in the National Assembly.
There are also many research institutes in the administration. However, due to the 5-year single term presidential system in Korea, there are limitations in establishing long-term national strategies.
National Assembly Futures Institute will conduct research on mid to long-term national development strategies with continuity and consistency irrelevant of the change of regime.
Also, since government-supported research institutes are specialized by field, there is a lack of convergence research encompassing diverse fields.
NAFI was launched with a small research team of 8 researchers.
We are an ideal research institute for the convergence research with experts in various fields including Yoobin Kim, Ph.D. of electronic engineering and scientific technology policy studies, Hongbeom Kim, Ph.D. of biological engineering, Bogyung Min, Ph.D. of geography, Sungwon Park, Ph.D. of political studies, Jaegwang Yoo, Ph.D. of international political studies, Chaejung Lee, Ph.D. of policy studies, Younghun Jung, Ph.D. of social laws, and Jongho Huh, Ph.D. of public health policy.
Letter T type is the concept of a talented person at the National Assembly Futures Institute, who holds the political neutrality while pursuing professionalism and consilience.
The logo of the institute contains the meaning of letter □ namely making the future through the convergence of four T letters which symbolize four research fields.
Our research team is not a simple research initiator but should become the best professionals in each field converged with other fields for the results after planning researches and participating in them directly.

Projects will be proceeded largely with three fields.
First is the base research.
Discovering factors to determine the future, we will predict the future of factors and deduce the implication of today.
Also, since the future depends on our choices, it is necessary to identify the “future” which people want to have.
Second is the research in four fields.
Four major research fields are international strategy, national growth momentum, sustainable growth, and improved life quality according to the National Assembly Futures Institute Act.
Third, it is a project to create the domestic and overseas network and improve the future awareness of citizens.
In the selection process of detail research subjects, we will closely discuss with members to find tasks of high national priority.

At the end of my term, I would like to be remembered as the president who laid the foundation of NAFI trusted by the National Assembly and citizens.
To this end, the most important factor is to maintain political neutrality.
Political neutrality does not mean to stand in the middle of pros and cons for all agendas.
Rather, it means to research only by professionality without political inclination.
We ask you not to doubt our neutrality but rather put blame on our lack of professionality.
The institution has begun with 12 personnel including 8 persons in Ph.D. level, 3 administrators, and a director.
Joint researches will be proceeded by networking with experts from diverse fields.
But 8 researchers are insufficient to design the future of our nation.
We would like to ask for your help and close observation for the growth of the National Assembly Futures Institute with affection and concern.
We promise to repay by building an institute trusted by the National Assembly and citizens.